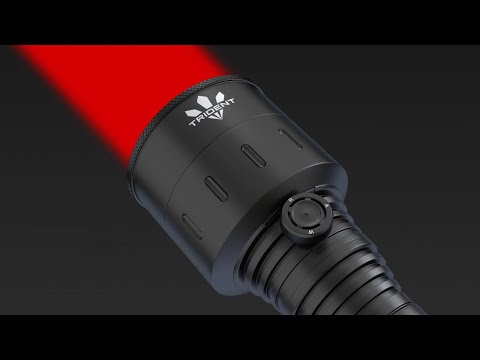 IN STOCK Order before 2pm for a same working day dispatch

*Finance not available on sale items

The Trident is one of our most powerful and versatile hunting lights yet, with a beam distance of picking up eyes out to 1000m and clear identification out to 350m across the range of LEDs, the trident will have you covered no matter the situation.

The Trident hunting lamps boast many useful features; not only 3 switchable LEDs, a dynamic rotary dimmer switch and easily focusable head, it also has a quiet switch, low-battery indicator, beam lock-out function (to prevent accidental activation), and an ‘Active Light Indicator’ on the tail-cap to indicate when the beam is on – perfect for use with the infrared (IR) LED, as a reminder to switch off when not in use.

But what will excite many night hunters the most is the powerful amber LED available in multiple combinations, which replicates street lighting, making it less spooky to quarry and easier on the eye.

A 1" Universal Hunting Light Grip Handle is now available, add this to your Trident to give you a true feel of traditional lamping.

“For quite a few years, night hunters have been asking for a strong amber LED, but nothing worked well with a convex lens, until very recently. And it works exceptionally well. The Trident is our brightest lamp with the clearest IR!”.

"There are times, when out with the night vision add on that the ability to switch to conventional lamping can be extremely useful."
"I was never a fan of amber light for lamping in the days of filters, but the amber LED on the Trident is a whole new ball game."

"I've always struggled to find a scope mounted light to control fox's with, the lights I had were either too heavy, inconsistent beam, poor battery life or the range was never up to my liking for clearly identifying my quarry. Since I got the Trident from Nightmaster that has all changed. The beam can go from flood to spot and the spotting distance is incredible. I've finally settled on the perfect light for my fox control."

With a large range of focus, you can adapt the Trident to throw out a tight pencil light beam for the longest distance possible or really open up the beam to a wide flood for up-close illumination - all of this from a simple twist of the head (one full twist will take you from spot to flood).

Night Master Trident features an intelligent Tri-LED mechanism meaning you can swap between the different coloured LEDs from a turn of the knurled dial without changing the focus or affecting the beam position on your point of impact.

The quiet Intelligent Dimmer Switch featured on the Night Master Trident has a number of functions; turns the light on/off, dims/brightness the beam, provides a lock-out function and an indicator tells you when the light is active (useful when using the IR) as well as a low battery indicator, to let you know when you need to swap or charge your battery.

The Night Master Amber / Red & White combination features a very powerful White LED, alongside our new Amber LED which will take your shooting back to the old-school methods and our brightest yet Red LED - these three LEDs combined together in one light will really give you the full advantage you need while you're out lamping.

The Night Master Trident Amber, Red & IR (850NM) combination features our clearest yet IR (850NM) LED, paired up with your Night Vision device you can expect very clear identification up to 350m, as well as our new Amber LED and our brightest yet Red LED - this set-up is really going to keep you hidden in the shadows as covertly as possible.

The Night Master Trident White, Red & IR (850NM) combination features a very powerful White LED, alongside our hugely popular Red LED and ultra-clear IR (850NM) LED - whether you're wanting a night out lamping or a covert night with your Night Vision device, this combination has you covered.

The Night Master Trident White, IR (850NM) & IR (940NM) features a very powerful White LED, alongside our ultra-clear IR (850NM) LED and now an option to swap to a more covert IR (940NM) LED - this now gives you the option to use your Night Vision device for the longest distance possible or for a balance of more covertness plus enhanced image compared to a built-in IR (fantastic for more 'spook-able' quarry, such as wild boar).

You should expect to receive your refund within four weeks of handing your package to the return shipper, however, in many cases you will receive a refund quicker. This time period includes the transit time for us to receive your return from the shipper (5 to 10 business days), the time it takes us to process your return once we receive it (3 to 5 business days), and the time it takes your bank to process our refund request (5 to 10 business days).

If you need to return an item, please contact us or simply login to your account, view the order using the 'Complete Orders' link under the My Account menu and click the Return Item(s) button. We'll notify you via e-mail of your refund once we've received and processed the returned item.

We can ship to virtually any address in the world. Please note that there are restrictions on some products, and some products cannot be shipped to international destinations, in which case you will not be able to complete checkout.

When you place an order, shipping methods and prices are displayed at checkout, please select the appropriate delivery method to your destination.

Please also note that the shipping rates for many items we sell are weight-based. The weight of any such item can be found on its detail page. To reflect the policies of the shipping companies we use, all weights will be rounded up to the next full pound.

Finance is offered through DekoPay (formally Pay4Later). If you wish to take finance on your order, please go to checkout as normal and select 'Finance' as your payment method. You will then receive an email/link to go to the finance application form. If you have any queries or would like us to process your finance application over the phone, just give us a call on 01535 611688.

*Please note that finance is not available on sale items and any order placed via finance which includes discounted sale items may be cancelled at our discretion.

Click on the orange bar below to view the repayment options. Or click here for more information.